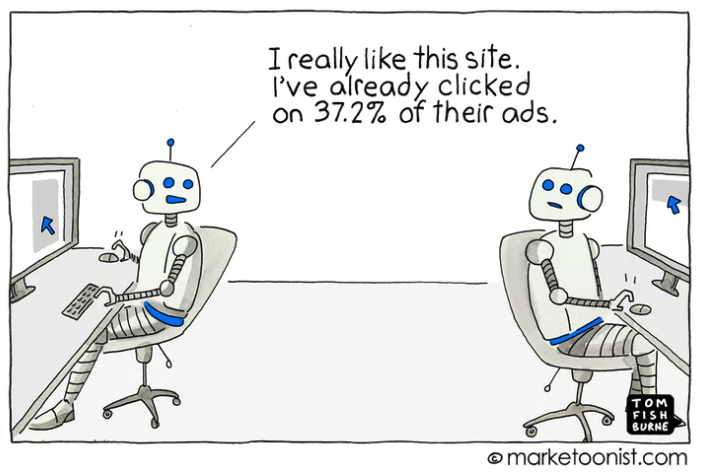 In a recent cartoon by our favourite Marketoonist Tom Fishburne, two robots are sitting at opposing desks, clicking on ads on their screens. One of the robots says that since he has already clicked on 37.2% of their ads, he must really like this site. Hilarious? Not so much if you were an advertiser.

Ad fraud is a serious problem in the advertising industry. Various studies reveal that fewer than half of all impressions are actually seen by humans and $6.3 billion of ad spend a year is wasted on fake traffic, or clicks that appear to be views but are actually the work of software. The constant threat looms of bad actors using robotic or other means to create false non-human traffic (NHT).

Curious to learn more? Check our selection of highlights on ad fraud and why it is detrimental to ad budgets:

What can you do to make sure you are not subject to ad fraud? Novelty Media, via SmartAdd, has developed a mobile media technology framework offering video and static content delivery to mobile subscribers. Thus, 100% of our impressions are delivered to real human beings and constitute verifiable views. Endorsed by the Mobile Operators themselves, our media channel delivers your brand content only to actual humans – verified mobile network subscribers, – thus eliminating any chance of ad fraud. Rest assured that your ad budget is not wasted to bot interactions and keep following our Marketing Bites to discover the other exciting benefits of SmartAdd.

H1 2022 in Marketing: Digital Dominance, Cookieless Future, the Metaverse and Other Issues